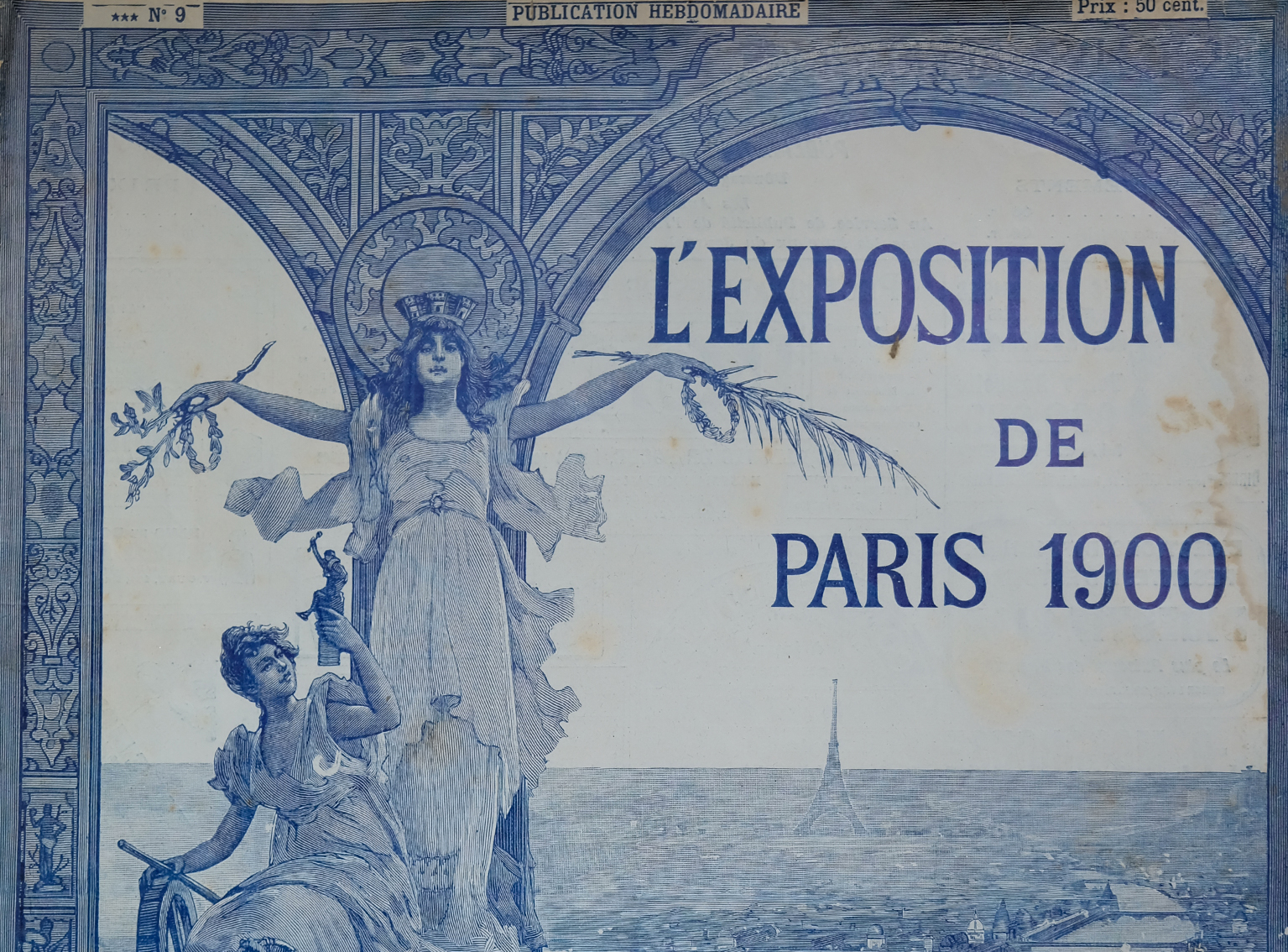 If there is one event of the Belle Époque in which I would have liked to participate, it is the Universal Exhibition which took place in Paris from 15 April to 12 November 1900. After 212 days, this emblematic event has left our capital with several signature buildings such as the Petit Palais and the Grand Palais. Let’s look at some of the writings from that time…

A Century in Review

The theme of the 1900 Universal Exhibition was “A Century in Review”. France hopes that this 5th edition will celebrate the world’s entry into a new century. Participating countries are invited to showcase their achievements and lifestyles. It obviously celebrates progress, cultural singularities and a deep desire to unify and understand differences.

I searched for a long time to acquire event magazines and was pleased to find some weekly supplements covering the exhibition (cover of N°9 illustrated). When you read one of these newspapers, you discover that the City of Paris pavilion is huge. Like many of the exhibition pavilions, it consists of a central hall surrounded by galleries on two floors. The journalist humorously notes that this configuration allows for “more surface area at the expense of the visitor’s legs”. Because to discover all the wonders presented at this magnificent international event, you had to be an adept walker! And when you know what the ladies of the time were wearing, you salute their courage and enthusiasm.

1900 Universal Exhibition: a showcase for progress

Among the most impressive pavilions that you can see in the illustrations of the weekly magazine are the marvellous Electricity Palaceand the Water Tower. Located at the end of the Champ de Mars, the Electricity Palace stands like a palace from the Arabian Nights. It is a lace of glass and metal studded with precious stones. A goddess standing on a chariot harnessed to hippogriffs is completely surrounded by a crystal sun. The magic must have really overwhelmed you when you first strolled past the palace, for there stood a monumental water tower with gushing waterfalls. The symbolism of this extraordinary water structure was “Humanity led by Progress, moving towards the Future”.

As you leaf through the beautiful illustrations, you will want to step back in time to 1900. In addition to your photo sessions in Belle Époque outfits offered at the Mademoiselle Louison studio, I am now thinking of offering you the opportunity to be embedded in some of these grandiose settings. Moreover, I do not forget that the first line of the Paris metro was built in the run-up to the 1900 Universal Exhibition and inaugurated a few months after it began. The more ideas I have for the future of the studio, the better! You will have the elegance of authentic outfits from my wardrobe, the singularity of retro photo portraits made as close as possible to your particularities, and soon the possibility of fictional settings with historical 1900 backgrounds.

The attraction of the moving walkway

One of the most popular attractions at the 1900 Universal Exhibitionwas the sometimes apprehensive ride on a moving walkway. Built on a viaduct seven meters above the ground, it could operate at two speeds: 4.2 km/h or 8.5 km/h. The moving walkway consisted of two mobile platforms, each three kilometres long. Forming a loop, it allowed the forerunner of the escalator to be tested in advance.

In some of the videos from the past, you can see playful or nonchalant adults, insecure visitors, clever people who miss the step and tumble down. An animation that symbolised progress and novelty! Nicknamed the “Street of the Future”, designed by the American engineers Schmidt and Silsbee, it could accommodate fourteen thousand people simultaneously. The famous master filmmaker Georges Méliès was also attracted by this life-size scene and filmed “Panorama pris du trottoir roulant Champ de Mars” et “Les Visiteurs sur le trottoir roulant“. And as the popular singer of the time, Polin, humorously put it: “I don’t see a locomotive, who’s doing all this dragging? “.

The international side of the 1900 Universal Exhibition

Progress, magic, enchantment and openness to the world: this is always the aim of the Universal Exhibitions. In 1900, the pavilions of the nations or foreign powers were lined up on either side of the Rue des Nations, which ran along the part of the Quai d’Orsay from the Pont des Invalides in the east to the Pont de l’Alma in the west. The most important pavilions, because of their size, were oriented towards the Seine, so that their facades were reflected in the river. A breathtaking spectacle from a boat!

The German pavilion was thirty-seven meters high and had a footprint of almost seven hundred square meters! With a tower seventy-five meters above the quay of the Seine, it housed, among other things, the art collection of Frederick II of Prussia, a display of photographs, books and graphic art. Winegrowing was given pride of place, particularly in the popular restaurant in the basement. The Grape Room, designed in the Art Nouveau style, was recovered after the exhibition and is now in the private museum of the sparkling wine producer Kupferberg in Mainz.

In the weekly newspaper in my possession, the journalist again emphasises the unifying spirit of the 1900 Universal Exhibition: “When the resolution taken by the Emperor to send to Paris the French art treasures belonging to the imperial collections was announced, there was at first a general murmur of admiring surprise for the ingenious courtesy of the idea and the chivalrous appropriateness of the procedure, and then, among art lovers, a foretaste of refined pleasure”.

It is therefore in this spirit of union and progress that I am going to use today’s innovative tools to put you in period clothing at the 1900 Universal Exhibition and take you on a journey in “Back to 1900” mode.

Mademoiselle Louison invites you into her private studio in the heart of Paris and dresses you up with vintage outfits and accessories from the Belle Époque.
Dressed as in 1900, you will experience the portraitsof yesteryear with serious and amusing stagings.
A personalised photo souvenir to make on your own, in a group, as a duo or as a family.